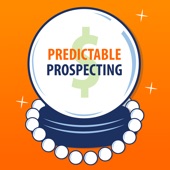 Predictable Prospecting
The Sales Development Playbook - Trish Bertuzzi
00:00 / 00:00
1x
Download file Leave Review
Share
Inspired to write the modern day version of Predictable Revenue, today’s guest Trish Bertuzzi wrote a book about achieving accelerated growth through inside sales. Entitled, The Sales Development Playbook it’s designed to avoid the same old techniques that keep insides sales teams in their comfort zone; unleashing their potential to skyrocket revenue. Trish reminds us that the inside sales team provides leads that feed the entire company and outlines how to unleash their power. Trish is motivated by her passion for inside sales. Her team of consultants at The Bridge Group, Inc. are committed to their clients success. Through problem solving and strategic change they unleash powerful sales teams in each of their client’s businesses. Trish’s extensive experience and passion for sales combined motivated her to write her book. In the Sales Development Playbook she introduces the six elements for building a sales pipeline. She believes that no matter you’re starting taking profound action and self analyzing are the ways to master all six elements and achieve massive sales success.